My friend, LDS author L.C. Lewis, reminded me that the bicentennial of the War of 1812 is less than two years away, and America is gearing up to host spectacular celebrations of the 200th anniversary of her second war of independence. Woohoo! 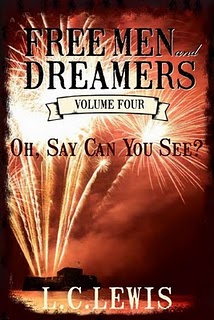 Several years ago, Lewis saw the fast-approaching event, and began writing a historical fiction series to commemorate this often overlooked moment and generation. Along the way, Free Men and Dreamers has garnered an impressive array of reviews, endorsements, and awards. Though each book continues the overall story, each volume is written as a stand-alone read as well, and Lewis thinks volume four, Oh, Say Can You See?, which weaves her characters through the events surrounding the writing of The Star-Spangled Banner, may be the most timely of all the volumes.
The novel launched nationally in October.

As always, I'm awestruck at L.C. Lewis's mastery of detail-rich prose. If you have any interest in the history of our nation, and in particular, the background of the tumultuous days in which our National Anthem came to be written; if you have read any of the previous novels and have fallen in love with the multitude of well-fleshed-out characters; you must read this novel!

Don't forget: this interview is part of L.C.'s blog tour, and there are prizes involved. See details here.
Here is material from the backliner of the book:
Although the British raids have left Washington a devastated, blackened city, the battered Constitution has held and the presidency has survived!
But the struggling government has no home. The British saw to that. Gone is the Capitol and her magnificent library, the chambers of the Supreme Court, the President’s House, and every relic and document not secreted out of the city.
Next on the list of British prizes—the rebellious port city of Baltimore! A victory here would assure the Americans’ defeat, but a loss would dilute the importance of the destruction of Washington.
But has the raid on Washington stiffened the backs of the Americans? This is the question gnawing at the leaders on both sides.
The Willows women are mourning their absent men—gone to war, or wounded, or captured—as they await the birth of a blessed child.
Mere miles away, attorney Francis Scott Key embarks on a diplomatic mission that will leave an everlasting mark on America. Proving that a pen can be more powerful than a sword, Key records his fears and hopes—the fears and hopes of his embattled people—as he watches the bombardment of Baltimore while detained in the midst of the British fleet.
What changed in this noble man’s pacifist heart, empowering him to pen the powerful anthem, known today as “The Star Spangled Banner,” an epic poem that rallied a shattered nation to rise from its knees to claim the dream of “one nation under God?”
Experience the personal sacrifice of five families placed in the firestorm of the War of 1812, citizen heirs of the sacrifice of the Founding Fathers.
L. C., you mentioned that Oh, Say Can You See? may be the most timely of all your books. What do you mean by that?
I could lump volume three, Dawn’s Early Light, in there as well because it surrounds the British attack on Washington. In my opinion, the devastation there really culminated in the writing of the Key’s epic poem, “Defence of Fort McHenry,” which we know now as The Star-Spangled Banner.
But what I meant is this: America is enjoying a renewed reverence for the Founding Fathers and their brilliance in designing the government they did. Sadly, many of us know less about the Constitution now than we did in sixth-grade, but that is changing today.
There is a sense of patriotism sweeping across the land that resembles that passion and urgency felt in 1814. Remember, the American political landscape was changed after the British attacked us. The iconic buildings Americans were beginning to identify with their nation and government had been destroyed. It was then that the flag rose from being a mere fort marker, to an emblem of this nation. Key recognized that as he peered across the Baltimore harbor, praying to see one of the last surviving symbols of America—that star-spangled flag flying above Fort McHenry. I think most Americans can identify with those feelings.
I’ve read that your research has been extensive. Why did you choose to write the events of this period as historical fiction rather than just as straight history?
There are some spectacular historical accounts of this period, many of which I reference, but as I read reviews of those authors’ brilliant work, I recognized that there was an entire audience of people who didn’t enjoy that format, but who learn history best when it is personalized and wrapped around a compelling storyline. So I researched this period and created characters readers can invest in, and had them experience these events. By doing this, I can place them anywhere and in the midst of any event I choose.

What was the hardest part of writing Oh, Say Can You See?
Since this volume thrusts our characters into the pivotal Battle of Baltimore and the events surrounding the writing of The Star Spangled Banner, I really wanted readers to feel the emotions experienced by the families as well as the soldiers and sailors during that "perilous night" with "bombs bursting in air.”
The cover is beautiful! Did you have a hand in designing it?
I had input. I knew I wanted an image of the bombardment of Fort McHenry with the focus on that splendid flag. Amy Orton, the cover designer at Walnut Springs Press, presented a concept and we tweaked it together. I hope it will make readers hungry to tear into the book.
Tell us a little about your  research for this volume.

Aside from tons of reading, and visits to Frederick and other sites, my research for this book took me to Fort McHenry where I spent time with the expert on the Battle of Baltimore—Scott Sheads—who not only heads the staff at the fort, but who has served as the curator of the "Star Spangled Banner" exhibit at the Smithsonian. Like most historians with whom I've had the pleasure of chatting, Sheads is generous with his research and observations, offering me tidbits of little-known information about the perilous battle upon which the hopes of a battered nation hinged, and about the principal characters, like Francis Scott Key, who observed it as a detainee in the harbor. He included many details about the days surrounding the writing of the poem that became our nation's anthem.


I hear one more volume is planned after this one. When will it be released, and tell us about the other volumes.
Book five is set for a spring 2011 release and it will carry us forward, as we see how the events of this period shaped America and affected the next generation. We’re toying with two titles—The Morning Breaks, and In God We Trust. Right now, we’re all leaning towards In God We Trust.
In God We Trust would get my vote. Tell us about the first three books in the Free Men and Dreamers series.
Volume 1, Dark Sky at Dawn, introduces the complex story of our six lead families—three American, two British, one slave—and the devastating prelude to the war.
Volume 2, Twilight's Last Gleaming,  carries readers into the harrowing events at Hampton, Virginia, and illustrates the toll the war takes on civilians—women and children. But through it all, a new tenacity begins to strengthen the young nation's spine as Americans rally to the cause of their nation.
Volume 3, Dawn's Early Light, throws our characters into the attack on Washington and the events that proved the mettle of the the Constitution and the Presidency. 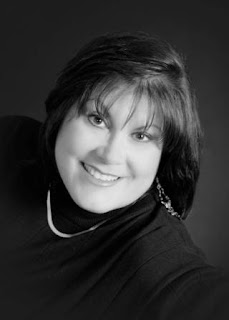 Tell us a little about L.C. Lewis.
Well, many readers will be surprised to hear that I’m a grandma and not a grandpa! Publishers tend to obscure female historical fiction authors behind a pen name because some readers just expect the authors of these books to be male. I write women’s fiction under my real name, Laurie Lewis. My most recent release was in April—a women’s novel titled, Awakening Avery, which is currently nominated for a Whitney Award.
I’m a long time resident of Carroll County, where my husband and I still reside. The past few years have been consumed by these books, but as soon as volume five is released I hope to pick up some of my old hobbies—genealogy, cross-stitch, the guitar and gardening. I’m dying to learn to play the piano and my brave daughter has offered to teach her uncoordinated mother the ropes.
Thanks so much for stopping by and chatting with us today.
It was a pleasure.
Let’s just remind readers that autographed copies of Oh, Say Can You See? are available at This is the Place Bookstore, and they also carry the entire series.
Visit L.C. Lewis at her web site and at her blog.
View the book trailer for Oh, Say Can You See?  here at YouTube.com.
Posted by Marsha Ward at Tuesday, December 14, 2010

Teatime with a Knight (Matchmakers in Time Book 2) - Kit Morgan

Marsha Ward is enrolled as a participant in the Amazon Services LLC Associates Program, an affiliate advertising program designed to provide a means for sites to earn advertising fees by advertising and linking to amazon.com.