On this special occasion, I'm resurrecting "Sample Saturday," which was a regular feature here on my blog three or four years ago. Why? Because I'm about to launch a new novel! 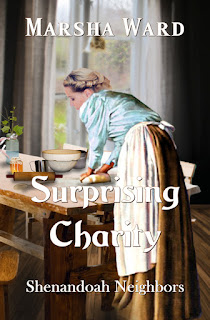 When Pedro Chaves arrives in Albuquerque begging Charity Bingham to marry him at the behest of her late husband’s ghost, she is stunned. She thought her life would be lived out baking pies and bread for hotel guests and loving on her increasing brood of grandchildren. Now, this man she barely knows wants a marriage of convenience.

Charity Bingham sat on the wooden veranda of the Albuquerque House in a brand-new rocking chair, taking in the late afternoon sun as it slanted under the porch roof to bathe her in light. The day’s heat increased by the hour, but she welcomed this respite in the outdoor air.

She wore her workaday outfit of a light-colored muslin bodice and skirt, patterned with sprigs of moss roses, and a gathered white cap of softer fabric that covered both the crown of her head and the knot by which she had captured her blonde hair that morning. Two nights before, she thought she had spied a gray hair as she brushed her locks, but before she could pluck it out, it had disappeared into the still abundant tresses. Although she usually wore her flour-covered apron from morning until night, she had abandoned it before she left the kitchen.

Charity oversaw the meals and baked bread and pastries for the guests of this, the only hotel in the town. She didn’t mind the familiar work, but the air in the stifling kitchen was too heavy and close for her taste.

A lone horseman appeared out of the mouth of a street leading to the plaza, skirted the side of the square, then turned onto the road that passed in front of the hotel. He sat upright in the saddle, wearing a long tan duster and a felt hat of the same color. As he came closer, Charity felt a slight flutter in her chest. She recognized the gentleman on horseback from the previous winter. He was the gracious host who had given her and her traveling family shelter from a blizzard.

The don was a married man with a charming wife, so Charity couldn’t explain the fluttering sensation. She had no reason to have any girlish notions about him, and indeed, she never had done so up to this moment. However, to her great chagrin, the flutter continued. In fact, she also felt her cheeks heating up, causing her a fair bit of consternation at her reactions to the man’s sudden appearance in her town. What a bother!

As she watched in increasing discomfort, Don Pedro rode nearer and nearer to the hotel. His hair, visible below the bottom edge of his hat, glistened silver in the sunlight as he approached.

Charity snatched the white cap off her head and patted her hair into order, chiding herself for her foolishness as she did so, and at the same time, wondering why his hair was not as she remembered it: a dark brown that gleamed in the light.

He drew his horse to a stop before a hitch rail pounded securely into the earth. His face appeared thinner than last winter, more drawn than she had seen it before. Lines that had not been in evidence when last she saw him creased his cheeks, and she caught her breath at his worn appearance. Has the man been ill?

Don Pedro dismounted with a fluid grace and paused beside the horse for a moment, slapping his hat against the linen garment that hung below his knees. Dust billowed momentarily in the breeze, then settled on the street. He wrapped his bridle reins around the hitch rail and strode toward the steps. At a closer view, the hair on his head appeared to have changed color from when she had first met him. Mere months ago, as she had just recalled, it had been a rich, dark brown with a slight amount of silver mixed in. Now his head was capped with a preponderance of silver hair, with only a scattering of brown. He must surely have been profoundly ill.

She saw him paste on a smile. It seemed to cost him effort, and she again wondered why he had come. Her hands trembled in her lap. She stuffed the cap under her skirt.

By now his dark eyes were fixed upon hers, and as he reached the top step, his hat twitched in his hand, then he approached where she sat motionless and upright in the rocker.

She didn’t know what to do with her hands. Why hadn’t she brought a piece of hand work with her to the veranda? She curled her fingers into balls, watching him come, then rose to her feet as he stopped before her.

He said no more, standing like a statue, upright, holding his hat in two hands before him, like a shield.

“Señ- Don Pedro,” she stammered. “What a surprise to see you.”

He gazed about the porch. “Is there a place where we converse in the private?”

As she mentally chastised herself for harboring a foolishly fluttering heart, his accented and slightly unconventional English fell on her ears as though the words were musical notes.

“Yes. There are seats in the lobby inside. Come with me.”

He took one step back and waited until she had passed in front of him, then followed, his boot heels clicking on the planks as the rowels on his spurs tinkled in accompaniment to his stride.

He leaned around her to open the door and she entered the lobby, unsettled by how closely he followed her. After a few steps, she gestured to a nook before a window that overlooked an alley that ran along the side of the building. A pair of green upholstered chairs stood in the nook, pointed toward the alley view. Small side tables braced the chairs.

She walked in front of one of the chairs and remained standing as he set his hat on the table beside him and took a seat.

“You have come far.” She pointed toward the back of the hotel. “May I bring you a refreshment from the kitchen?”

“Sí. That is to say, ‘yes’. If you have the glass of water?” He made it a question with the rising inflection in his voice, then added, “I do not require more than that.”

“Water we do have. Freshly drawn and cool from the well.” She cast off the uncertain maiden in favor of the gracious hostess and left him for a few moments to retrieve a tumbler of water as well as her equilibrium.

She brought back two tumblers on a tray, along with a half-filled pitcher. She’d brought along the second tumbler in case she decided to join him. Her throat certainly had become parched since his arrival.

She set the tray on the nearest table, poured water into the first tumbler, and handed it to him, relieved that his fingers did not touch hers. She cleared her throat. “You are far from home, señor.”

He drank of the water and swallowed. “I am,” he agreed.

Having decided she needed a drink of water, too, she filled the second tumbler, and then sat.

“Have you come to Albuquerque on business?” She sipped her water.

“In a way,” he said, avoiding her eyes as he again drank. “Not, you will please understand, in the usual way of business.”

“You have my entire attention.”

Don Pedro drained his glass, took in a large quantity of air afterward, then seemed to hesitate.

He pursed his lips and exhaled most of the air.

She waited, getting a sense that he struggled with dire distress. “Sir, have you trouble?”

“Oh, my dear señora, you cannot know of the trouble I have.” He paused, and his dark eyes became luminous, as though they had a film of tears. “I have come to pedir, to ask you a very great favor.” He rose from the chair, took a step, then fell to his knees before her. “Dear señora, you will do me the honor to become my wife?”

"Oh my! Do you think, no, that is impossible. She would not--

After you buy and read Surprising Charity, please consider posting a review to make my day.

E-Books are $3.99: Kindle | NOOK | Kobo | Apple | Smashwords (all formats)
You may also use this Universal Book Link to buy at your favorite digital store.
Print Books are $11.99: Amazon