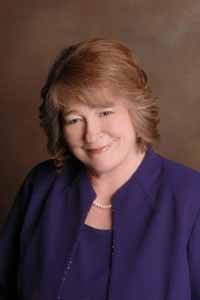 Today's guest for the Author interview series is Heather Horrocks, who lives in the Salt Lake Valley with her family. Deseret Book is publishing her latest book, a romantic comedy entitled How to Stuff a Wild Zucchini, on May 13. Heather's website is at HeatherHorrocks.com.

Welcome Heather! Tell us who you are and what you do.

I’m an author who had a somewhat unorthodox upbringing. I was raised in South America and the Middle East, and wrote my first stories as a teenager in Kuwait, where my sister and I proved it really is hot enough to fry an egg on the sidewalk. I wrote my first novel in three months on a typewriter when I was 21, I used every romance cliché possible (including amnesia — need I say more?), and never rewrote anything, which is why it’s so much fun to pull it out occasionally when I need a good laugh. I wrote sporadically until my youngest child (who is now 18) was two, when I decided it was time to either actually start writing, or to stop saying I was a writer. So I took a class and started doing the scary things that writing requires. Now I’ve written about twelve novels and several children’s books.

What type of writer are you? Do you plan ahead/plot or do you simply fly by the seat of your pants?

I used to be a seat-of-the-pants writer, but nowadays I have a fantastic ‘conspiracy group’(you know—two or more people plotting together). We meet every month or two and plot the skeleton of an entire novel each time, and every third novel plotted is mine. From those notes, I create an outline, and work it in that shorter form until I feel like it really works (you now–if this goes here then I need to mention this there)

Do you write best at a certain time of the day?

When I was younger, with a younger family and a full-time job, it was between 10 p.m. and 2 a.m. Nowadays, my body won’t allow me to think clearly after about 9 p.m., so I am forced to be more wise in my writing schedule. Actually, I try to get it done as early in the day as I can, so I don’t have that nagging in my mind all day that I need to get back to it. I walk early for the same reason.

What food or snack keeps the words flowing?

Probably nothing that I can eat nowadays, since I started eating more wisely so I could make sure I got healthier. I had quite a health crisis after my father died a few years ago, and that woke me up to needing to make those eating changes now rather than later.

What sparks a story?

Almost anything can, but I especially love to come up with really catchy titles and plot from there…things like Old Maid of Honor, Sunbeams On the Loose, Bat Out of Heck, Free Agency—And How to Enforce It, Holier Than Thou (Heavenly Donuts, Down-to-Earth Prices), and Remember the A La Mode, all of which are plotted and/or written, as well as others like Giraffic Park.

What was it about your genre that interested you enough to choose to write in it and not in another genre?

I love romances and I love mysteries, and so I actually am also working on two mystery series (the WhoDunHim Inn and the Bad Mothers Club), but for now I’m concentrating on these romantic comedies. I love romances that don’t have all the raunchy language and scenes that so many on the market have nowadays, which is also why I chose to place my babies with Deseret Book, because I knew they’d welcome the clean romances where perhaps a national
publishing house would not.

Character you wish you had created?

Harry Potter or Edward Cullen. (Laugh.) Actually, I aspire to create characters as witty as Jane Austen’s. In movies, I wish I’d created the Galaxy Quest crew, and the National Treasure folks. I also want to win awards for excellence in writing.

What authors do you look to as a role model and inspiration?

There are several, with different reasons for each. Anne George and her Southern Sisters for just plain fun between characters, Debbie Macomber for her businesslike approach to writing, Anita Stansfield for her warm and loving response to her fans, J. K. Rowling for showing us that even the sky is not the limit, Jane Austen for staying power and the original witty dialogue.

What's the best advice you ever received?

One of my former critique partners saw a tee-shirt with a hockey saying: “Forget the blood and get back on the ice.” That’s sometimes what writing and pursuing a writing career feel like. I allow myself 48 hours to truly feel any major discouragements, and then the pity party ends, I pull up my big girl pants, and get back to the page.

I believe good writers read a lot. What do you use to mark your page when reading?

An index card, because it doesn’t slip out. So when I had my business cards and bookmarks printed, I had them done with a matte finish so people could use them without having them fall out.

What one thing do you like most about writing? Least?

I love losing myself in the excitement of creating a story from nothing. Poof! We’re like magicians who are always discovering more magic in our pages, and that excites me. I love meeting all these cool new people who walk around on my pages. 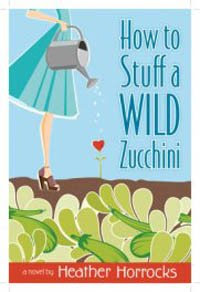 Your book is called How To Stuff A Wild Zucchini, published by Deseret Book Publishing. Tell us what the book is about and why you wrote it.

Here’s the blurb on the back of the book (which I wrote, by the way, except for two half sentences, and I’m delighted they kept it as is): Sophisticated New York playwright Lori Scott feels like a failure when her producer boyfriend calls it quits on both their relationship and her first play. On a dare, she throws a dart at a map and ends up moving to Brigham City, Utah, where she plans to set aside writing, religion, and men to focus on her new career substituting as The Garden Guru for the local paper. But fate has something else in mind. When she accidentally lights her house on fire, Lori has no idea of the sparks that lie ahead. Will she be able to resist the charm and persistence of local firefighting hero John Wayne Walker? Will old hurts and fears cause her to turn her back on the best thing that’s ever happened to her? A delightful contemporary romance about following your heart, finding true love, and wrestling with a basket full of zucchini!

I wrote Zucchini for several reasons. I was working to create a line of romantic comedies for Deseret Book, novels full of witty dialogue, books that were entertaining as well as uplifting. I was playing around with titles, and when that old beach movie popped into my head: How To Stuff a Wild Bikini, I thought it would be funny to switch Bikini to Zucchini—and others seem to have agreed. Also, it was right in the middle of August and neighbors left a bag of zucchini on our porch…which got me thinking. Hmmm. And, yes, there is a zucchini-ditching scene in the book.

Why should anyone part with their hard earned cash and precious time to read your book? Sell it to us!

Because it’s a fun and funny read with uplifting story elements. Because I work hard to make sure my books have a satisfying ending, so I’m hoping you reach ‘the end’ and sigh with contentment. I love entertaining people, and I feel this book will do exactly that. It’s frilly and fluffy—but at its heart it’s a book about healing and forgiveness and working past our fears to get what we want out of life. And because there’s a delicious zucchini curry recipe in the back. : )

Where can readers buy your book?

How To Stuff A Wild Zucchini is currently for sale at Deseret Book and Seagull Book stores and online at DeseretBook.com. It’s also available for pre-order on Amazon.com and BN.com with an official release date of May13, 2009.

What is your next project?

Deseret Book already has my next two books, Sunbeams On The Loose and Old Maid of Honor, and I have four more plotted for them. I’m working on Old Testament stories for my next Women Who Knew book. And I’m excited to get the first book in my Bad Mothers Club mystery written.

What advice would you pass along at this point in your career?

Don’t lose heart. Keep going—despite every discouragement, every rejection, every disappointment. I just read a great quote by an accomplished mountaineer, Lincoln Hall, who scaled Everest on his second attempt, but then tragedy struck and he was left for dead so that all the men didn’t die trying to get him down—and then he was found barely alive the next day. Later, he said, “There may have been some luck involved, but luck is of no use unless you have a never-give-up attitude.” In addition to mastering the craft of writing and plotting, you must cultivate your own never-give-up attitude, because that might be all that gets you to the peak and back safely. To quote one of my favorite movies (Galaxy Quest): “Never give up. Never surrender.” So I wish you good luck in going for your dream, no matter what your dream happens to be.

Heather, what are the titles of your previous books?

I’ve written two inspirational books, Women Who Knew the Mortal Messiah and Men Who Knew, put out through my own company, Word Garden Press (that story is my walk in faith). I’m currently working on the third in the series, Women Who Knew The Great Jehovah, stories of women in the Old Testament who are also in Christ’s lineage. I’ve written a baptism book, You Just Turned 8, that I’ll be submitting, as well.

I’m planning two big book signings where I will give away 50 free copies of one of my inspirational books, Men Who Knew the Mortal Messiah, one to each of the first 50 people who buy How To Stuff A Wild Zucchini. I’ll post more information about that on my website.

Thank you for being my guest, Heather.

Thanks again for doing this, Marsha. I very much appreciate it.
Posted by Marsha Ward at Friday, May 08, 2009